A year or so ago, videos showing people touching harvestmen aggregations (like balls of fluff, all those long legs twined) and then screaming as the harvestmen revealed their multitudes and dispersed became popular – as if to say: look at the horrors, disguised and waiting, the world holds.

Harvestmen are neither horrific nor spiders. They cluster to ward off the cold, and some studies have suggested they group for comfort. Every time evolution’s come knocking in the last several million years, they’ve politely declined. The males are the only arachnid to have a penis; it resembles a scythe.

Why do we hold scared things in contempt, seek to destroy what runs away or bears an ancient body? The more I drew the harvestmen’s legs, the more I saw patterns, felt the sensual softness of their barely-there forms. Harvestmen move via leggy pacemakers; I move to kill any distaste that threatens to harm. 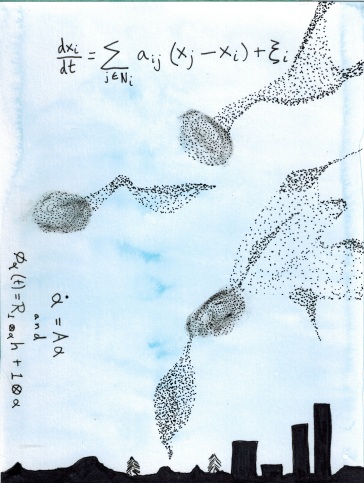 Dusk, and the birds move together.  Against a darkening sky they collapse into black paper cut outs.  If music is the silence between the notes, these flecks of negative space make the vast sky.  They dive over the train station in Rome, come together and circle round as if responding to a square dance caller.  Any member can initiate the movement and it propagates through the flock like a wave.  A mathematician in the piazza scribbles differential equations in his notebook desperate to describe how the individual relates to the flock.   A poet watches 10,000 flapping pairs of wing and repeats “…they roll / like a drunken fingerprint across the sky…”

We took a word to describe highly social animals, animals that almost share a soul their level of cooperation is so striking, and we applied it to our own personalities.  For animals, gregarious is many acting as one.  For us it is one acting with abandon.

I am multitudes, but my flock is never in sync. I have no grace or coordination.  My ideas and passions dont vary in relation to the others.  Each is a panting, jumping, wild beast to which I dont have time to give myself over.

With all our three dimensional models and computer simulations, we still cannot fully explain flock coordination.  Do we ask the question because we think the answer will tell us how to coordinate our own disparate selves?