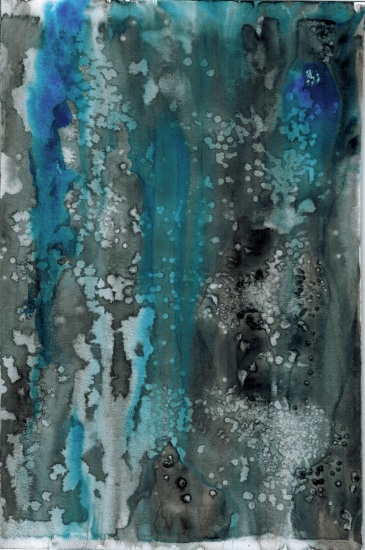 Foraminifera are tiny ocean creatures, a cross between a plant and a seashell.  Graceful as the architecture of basilicas, they form calcium twists, twirls, swirls, spirals visible under a microscope.

These creatures live in the water, die, and fall to the sea floor where they collect in thick layers.  Over time this becomes limestone, if the ocean floor is subducted the limestone becomes marble.  The sculpture of the David is an ooze of heated metamorphosed foraminifera.

This process is a pump over geologic time, pumping carbon from the atmosphere into the ocean into forams into the mud that turns to rock.  Rock that pushes up into mountains to crumble under the forces of wind and water.  This cycle regulates the Earth’s climate.

Ocean acidification is dissolving these creatures – too much CO2 in the atmosphere, now ocean, now preventing the burial and pumping of carbon into the earth.

The dissolution of so many acts of grace. 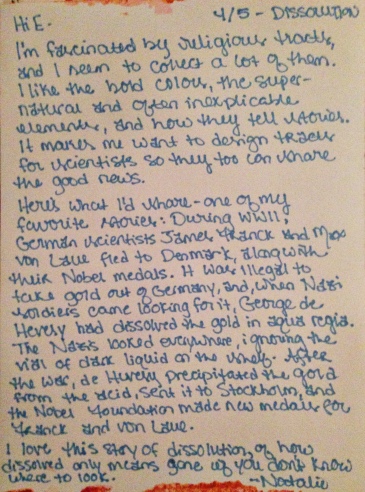 I’m fascinated by religious tracts, and I seem to collect a lot of them. I like the bold colors, the supernatural and often inexplicable elements, and how they tell stories. It makes me want to design tracts for scientists to they too can share the good news.

Here’s what I’d share – one of my favorite stories: During WWII, German scientists James Franck and Max von Laue fled to Denmark, along with their Nobel medals. It was illegal to take gold out of Germany, and, when Nazi soldiers came looking for it, George de Hevesy had dissolved the gold in aqua regia. The Nazis looked everywhere, ignoring the vial of dark liquid on the shelf. After the war, de Hevesy precipitated the gold from the acid, sent it to Stockholm, and the Nobel Foundation made new medals for Franck and von Laue.

I love this story of dissolution, of how dissolved only means gone if you don’t know where to look.