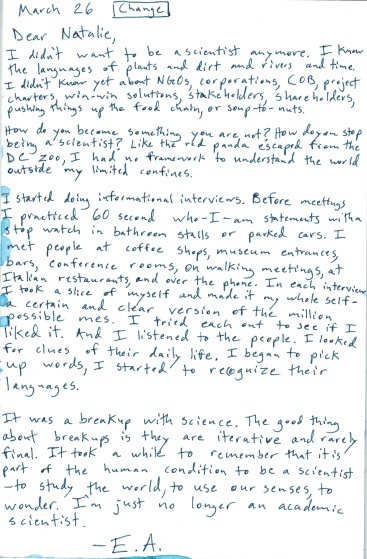 I didn’t want to be a scientist anymore.  I knew the languages of plants and dirt and rivers and time.  But I didn’t know anything yet about NGOs, corporations, COB, project charters, win-win ideas, stakeholders, shareholders, pushing things up the food chain, circling the wagons, or soup to nuts.

How do you become something you are not? How do you stop being a scientist?  Like the red panda that escaped from the DC zoo I had no framework to understand the world outside my limited confines.

I started doing informational interviews.  Before meetings I practiced 60 second who-I-am statements with a stop watch in a bathroom stall or a parked car. I met people at coffee shops, museum entrances, bars, conference rooms, walking through downtowns, at italian restaurants, and over the phone.  In each interview I took a slice of myself and made it my whole self, a certain and clear version of the million possibilities of me.  I tried each out to see if I liked it. And I listened to the people, I looked for clues of their daily life, I picked up words, I started to recognize their languages.

It was a breakup with science, but the good thing about breakups is they are iterative and rarely clean.  It took a while to realize the simple fact that being a scientist is part of the human condition – to study the world, to use our senses, to wonder.  I’m just no longer an academic scientist. 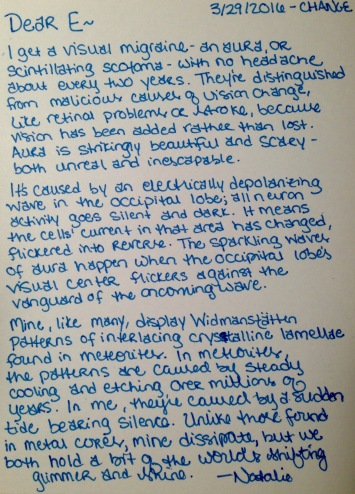 I get a visual migraine – an aura, or scintillating scotoma – with no headache about every two years. They’re distinguished from malicious causes of vision change, like retinal problems or stroke, because vision has been added rather than lost. Aura is strikingly beautiful and scary – both unreal and inescapable.

It’s caused by an electrically depolarizing wave in the occipital lobe; all neuron activity goes silent and dark. It means the cells’ current in that area has changed, flickered into reverse. The sparkling waves of aura happen when the occipital lobe’s visual center flickers against the vanguard of the oncoming wave.

Mine, like many, display Widmanstätten patterns of interlacing, crystalline lamellae found in meteorites. In meteorites, the patterns are caused by steady cooling and etching over millions of years. In me, they’re caused by a sudden tide bearing silence. Unlike those found in metal cores, mine dissipate, but we both hold a bit of the world’s shifting glimmer and shine.