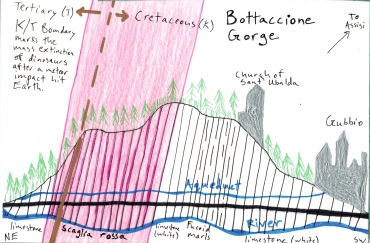 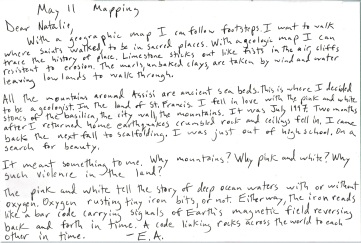 With a geographic map I can follow footsteps.  I want to walk where saints and pilgrims walked, to be in such sacred spaces.  With a geologic map I can trace the history of place.  Limestone sticks out like fists in the air resistant to erosion. The marls, unbaked clay, taken by wind and water leave low lands to walk through.

All the mountains around Assisi are ancient sea beds.  This is where I decided to be a geologist.  In the land of St. Francis.  I fell in love with the pink and white stones of the basilica, the city walls, the mountains.  It was July 1997.  Two months after I returned home earthquakes crumbled rock and ceilings fell in. I came back the next fall to scaffolding. I was just out of high school.  On a search for beauty.

It meant something to me. Why mountains? Why pink and white? Why such violence in the land?

The pink and white tell the story of ocean waters with oxygen or without.  Oxygen rusting tiny bits of iron or not.  The iron reads like a bar code, carrying signals of Earth’s magnetic field reversing back and forth through time.  A code linking rocks across the world to each other in time.

Reference to Walter Alvarez’s The Mountains of Saint Francis 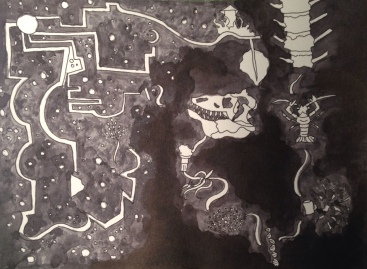 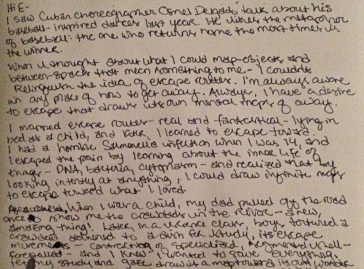 I saw Cuban choreographer Osnel Delgado talk about his baseball-inspired dances last year. He likes the metaphor of baseball: the one who returns home the most times is the winner.

When I thought about what I could map – objects and between-spaces that mean something to me – I couldn’t relinquish the idea of escape routes. I’m always aware in any place of how to get away. Always, I have a desire to escape that draws its own mental maps of away.

I mapped escape routes – real and fantastical – lying in bed as a child, and later, I learned to escape toward. I had a horrible Salmonella infection when I was 14, and I escaped the pain by learning about the inner life of things – DNA, bacteria, cytoplasm – and realized that by looking intently at anything, I could draw infinite maps to escape toward what I loved.

When I was a child, my dad pulled off the road once to show me the crawdads in the river – a new, amazing thing! Later, in a science class, boys tortured a crawdad adhered to a dish for study, its escape movements – contraction of specialized, segmented shell – forestalled, and I knew I wanted to save everything, let my study and gaze draw it a map toward its own wonder.

Materials: India ink; the left half of the card maps my childhood escape routes, and the symbology is only for me:)