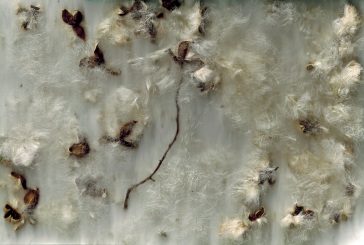 I’ve been listening to Invisibilia a lot. I heard one about a man, Jim Verhagen, a non-nature-y guy who becomes obsessed with wildlife on North Beach, New Jersey. He has neglected his family to pursue an obsession with the birds and now has a cult blog following. He reads the behavior of the birds, their interactions. It’s not that he finds nature peaceful, it’s frenzied and stressful, and it is this that he finds comfort in. Seeing stressed birds makes him feel that this is the normal state of living. He has found an ecosystem that reflects his own chaotic interior. I find it comforting that he finds this comforting.

I read the landscape in fossil dirt, fossil seeds, fossil plants, fossil teeth. I read ancient landscapes that are no more. I read for ghosts, for ancient catastrophe. It is this puzzle that drew me in.

I equally like the idea of finding peace or chaos in the landscape and melting into it. But that is not what I find. Instead I lose myself so that I’m not a character. And it is this disappearance I find soothing. My escape from ego. 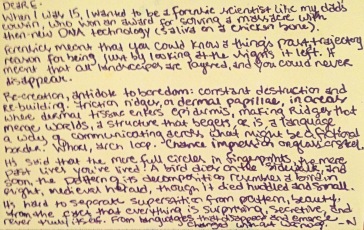 When I was 15, I wanted to be a forensic scientist like my dad’s cousin, who won an award for solving a massacre with then-new DNA technology (saliva on a chicken bone).

Forensics meant that you could know a thing’s past, trajectory, and reason for being just by looking at the signs it left. It meant that all landscapes are layered, and you could never disappear.

Re-creation, antidote to boredom: constant destruction and re-building. Friction ridges, or dermal papillae, in areas where dermal tissue enters epidermis, ridges that merge worlds, a structure that begets, or is, a language, a way of communicating across what might be a fictional border. Whorl, arch, loop. Chance impression on glass or steel.

It’s said that the more full circles in a fingerprint, the more past lives you’ve lived. A bird dies on the sidewalk, and soon, the pattern of its decomposition resembles a bird in flight, medieval herald, though it died huddled and small.

It’s hard to separate superstition from pattern, beauty. From the fact that everything is surprising, secretive and never truly itself. From languages that disappear and emerge, changed, without warning.