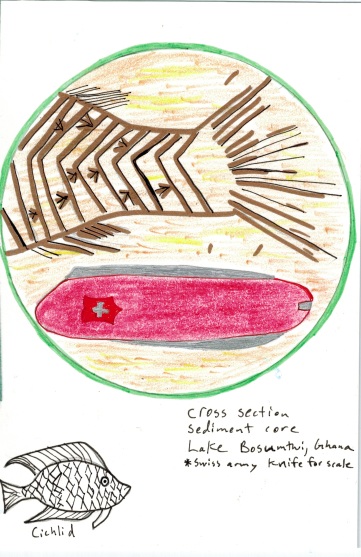 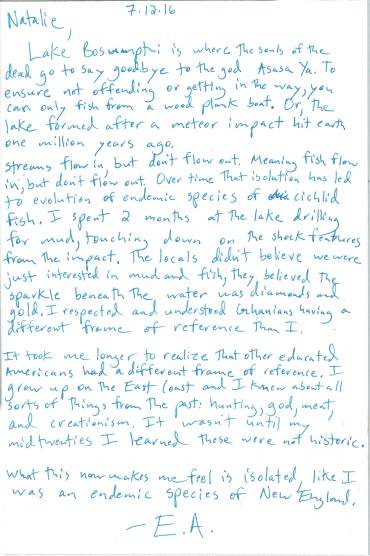 Lake Bosumtwi is where the souls of the dead go to say goodbye to the god Asasa Ya. To ensure not offending or getting in the way, you can only fish from a wood plank. Or, the lake formed after a meteor impact hit earth one million years ago.

Streams flow in, but don’t flow out.  Meaning, fish flow in, but don’t flow out. Over time that isolation has led to evolution of endemic species of cichlid fish.  I spent two months at the lake drilling for mud, touching down on the shock features from the impact.  The locals didn’t believe we were just interested in mud and fish, they believed the sparkle beneath the water was diamonds and gold. I respected and understood Ghanians having a different frame of reference than I did.

It took longer for me to realize that other educated Americans had a different frame of reference than me.  I grew up on the East Coast and I knew about all sorts of things from the past – hunting, god, meat eating, and creationism.  It wasn’t until my mid twenties I learned these were not historic.

What this now makes me feel is isolated, like I was an endemic species of New England.

I’ve been trying to trace my fear of ants. Me, who will happily chase a spider or a millipede to get a closer look and make friends.

I look at pictures, learn about ants’ lives and fears. When we say “pest” or “infestation,” we mean a life lived under hostility.

I’m confronted with the fact that, so often, I only add suffering, that I value calming my fear or shame more than the billions of years (well, like 4 and a half) of agony that led to life.

I look at what I love: bacteria. Blochmannia, Wolbachia, residing in the ants’ ovaries. Are they parasites or inextricable helpers, or both, or always changing? They merged – bacteria to ovarian cells – 30 to 40 million years ago. The Trichogamma wasp can reproduce without a male…but with the help of Wolbachia!

Some say that cancer – mutation of our cells, that on-and-on inside of us, lives and bodies composed of mistakes – is our destiny. Some say that if it were prevented, a worse cause of death would take its place.

My grandma died last year of ovarian cancer. It was one of the worst things I’ve seen. When she died, I had the sense that she was both irrevocably gone and right here, and somehow flung, which wasn’t awful at all.

Bonds forged through circumstance. Relationships that oscillate between harmful and beneficial so you never know. We keep sucking down the O2 that breaks us down because we evolved together.

In the gaster of the thing I fear most, I fell in love, confirming my suspicion that everything scary has a beautiful surprise at the tail end.

Medium: ink and watercolor (the image is of ant ovaries)