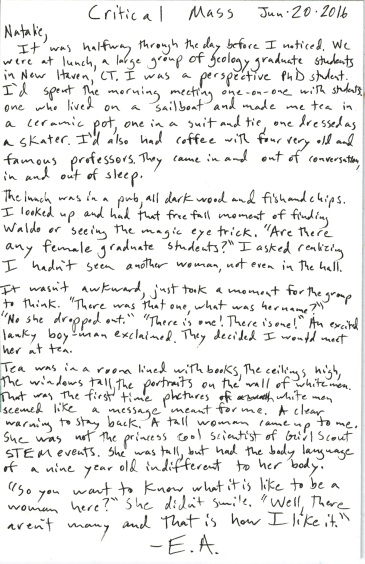 It was halfway through the day before I noticed.  We were at lunch, a large group of geology graduate students in New Haven, CT.  I was a prospective PhD student and had spent the morning meeting one-on-one with students: one lived on a sail boat and made me tea in a ceramic pot, one wore a suit and tie, another dressed like a skater.  I had coffee with four very old very famous professors who seemed to come in and out of sleep, in and out of the conversation.

The lunch was in a pub, all dark wood and fish and chips. I looked up and had that free fall moment where you find Waldo or make the magic eye trick work.  “Are there any female graduate students?” I asked realizing I had not seen a female yet, not even one walking in the hall.

It wasn’t awkward, it just took a moment for the group to think.

“There was that one, what was her name?”

“There is one, there is one,” an excited lanky man-boy exclaimed.  They decided I would meet her at afternoon tea.

Tea was in a room lined with bookshelves, the ceilings high, the windows tall, the portraits on the wall – white men.  That was the first time pictures of men seemed like a message meant for me, a clear warning to stay back.

A tall woman came up to me. She was not a princess scientist or a cool female scientist like they show at Girl Scout STEM events. She was tall and had the body language of a nine year old still indifferent to her body.  “So you want to know what its like to be a woman here?” she asked me.  “Well there arent many, and that is how I like it.”

Note on art: Generally, a critical mass is defined as 20% – that means for it to not be weird or awkward you need at least 20% of the group to be like you.  Thinking about what this means as a female scientist was inspired by listening to Jay Newton-Small talk about her new book, “Broad Influence.” 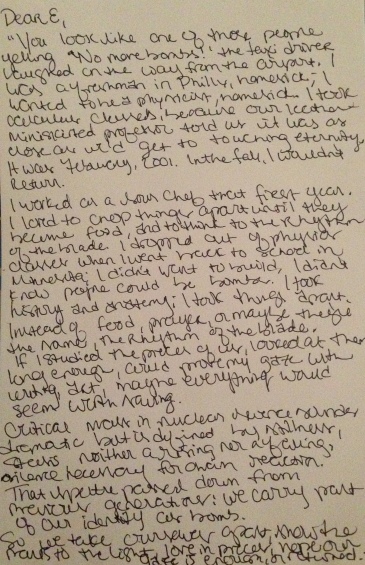 “You look like one of those people yelling, ‘No more bombs!'” the taxi driver laughed on the way from the airport. I was a freshman in Philly, homesick; I wanted to be a physicist, homesick. I took calculus classes because our leather-miniskirted professor told us it was as close as we’d get to touching eternity. It was February, 2001. In the fall, I wouldn’t return.

I worked as a sous chef that first year. I loved to chop things apart until they became food, and to think to the rhythm of the blade. I dropped out of physics classes when I went back to school in Minnesota; I didn’t want to build, I didn’t know people could be bombs. I took history and anatomy; I took things apart. Instead of food: prayer, or maybe they’re the same, the rhythm of the blade. If I studied the pieces of us, looked at them long enough, could prove my gaze with writing, art, maybe everything would seem worth saving.

Critical mass in nuclear science sounds dramatic but is defined by stillness, stasis, neither a rising nor a falling, silence necessary for chain reaction. That spectre passed down from previous generations: we carry part of our identity as bomb.

So we take ourselves apart, show the parts to the light, love in pieces, hope our gaze is enough, or returned.